“…one needs to keep in mind that SMEs are actually the job creation engines of an economy, so if you look at any developed economy, say Europe for instance, SMEs create anything, you know, something between 95 plus to 98 percent of all jobs are created by SMEs, not by the big large corporations that hog all the limelight.” 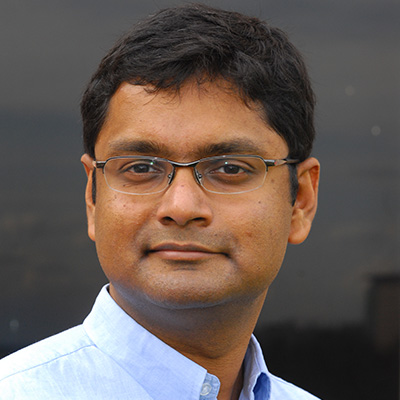 In this podcast interview, Reuben Abraham talks about the economic development created by entrepreneurship. He addresses the need for a growing entrepreneur friendly environment in India, and the factors that promote the growth of this environment. Reuben concludes by stating that the sign of a good entrepreneur is one who views inefficiencies as opportunities.

Reuben Abraham is Partner and Head of Urbanization at the IDFC Foundation. He is also a non-resident scholar at the Urbanization Project at New York University’s Stern School of Business. Previously, he was a member of the faculty and executive director of the Centre for Emerging Markets Solutions (CEMS) at the Indian School of Business, where he remains on the Next Generation Leaders Board. Reuben founded CEMS to research, develop and commercialise market-based solutions to pressing urban problems across the following verticals: finance, education, health, housing, and energy.  He serves on a number of advisory boards including TED Fellows, the Soros Economic Development Fund, India’s Centre for Civil Society and Unicredit Bank, Italy’s largest bank. In 2012, Reuben was named to Wired’s “Smart List 2012: 50 people who will change the world.”

Reuben Abraham: Thank you. Thank you for having me.

Shivraj: Reuben, you talk about how entrepreneurship has actually driven economic development in emerging economies like China and Korea, do you see the same sort of thing happening in India?

Reuben Abraham: Well I mean just to clarify entrepreneurship is one of the many things that contribute to economic development. I mean entrepreneurship has a role to play in the sense that entrepreneurs create wealth, but they basically take advantage of increasing productivity and so on, but fundamentally they create a lot of wealth that does two things. One is in and of itself, it creates wealth for the entrepreneurs per se, but also people who work with the entrepreneurs all of that and they create jobs. And the second part of it is that through the taxation process they actually add to the revenue base, which then contributes to the government’s kitty in terms of redistribution, whether that be for social welfare programs or provision of infrastructure or what have you. So that wealth creation is extremely important and that really is the role that entrepreneurs have played in all of these countries that have had rapid economic growth. And the wealth creation bit is important because absent wealth, you’ll be condemned to redistributing poverty.

Reuben Abraham: So the distribution of wealth and entrepreneurs don’t necessarily have anything to do with each other but for them the entrepreneurs to be successful in India, you basically need to have an entrepreneur friendly environment which today doesn’t exist. I mean everything unfortunately is aimed at making things harder and harder for entrepreneurs. I mean things have obviously gotten better since the early 90s but you know they’re nowhere near where it should be, so people who think that India has gone through this, through neo-liberal reform for instance need to understand the fact that on the doing business index of The World Bank, India is still stuck at 135 out of whatever 160 countries, which means things havn’t really improved for entrepreneurs, so for SMEs to be successful in India they need a lot of the transaction costs around entrepreneurship to actually be taken out.

Shivraj: And so what will it really take to create that entrepreneur friendly environment in India, what are the precipitating factors that you feel are really important right now?

Reuben Abraham: Well if you think through the transaction costs lens I would argue that by in large small and medium business has about 4-5 important transaction costs, one is access to finance, second is access to markets, third is access to knowledge and knowledge networks, technology all of those things. The fourth is regulatory and government policy which is actually probably the most important bit in this and the fifth is access to talent and all of these are currently transaction costs but the most important bit of it is as I said, government and regulatory policies, so if you actually look at the doing business index, it’s actually a very useful gauge with which you can look at how we economies are actually performing viz-a-viz how business friendly they are. So for instance if you look at the doing business index of the World Bank, the top 20 countries in the doing business index pretty much correlates fairly strongly to some of the richest countries on the planet and at the same time the bottom 20 of the doing business index of the World Bank is also some of the poorest countries in the world, there are few exceptions, but by in large that rule holds. Now in terms of and this probably is equally a response to your previous question, is that one needs to keep in mind that SMEs are actually the job creation engines of an economy so if you look at y developed economy so say Europe for instance SMEs create anything, you know, something between 95 plus to 98 percent of all jobs are created by SMEs, not by the big large corporations that hog all the limelight. In the United States it is slightly smaller but still create about 85% of all jobs. So for a well-functioning economy you actually need a thriving entrepreneurial in specifically small and medium business sector, because that is where a lot the jobs are actually created. So, from that perspective it’s very very important to a) encourage the growth of SMEs and create a business friendly environment and b) to reduce the transaction costs that I just outlined earlier which actually makes it easier for these SMEs to flourish.

Shivraj: And what about the concentration by government on opportunities to create greater skill opportunities, would that really help?

Reuben Abraham: Well I don’t think the government should be in the business of creating jobs. One needs to crucially look at the word ‘government’ itself and it contains the word govern which should really be the primary responsibility of government and I mean if government absconds from its primary responsibility which is to provide governance then everything else it does adds up to nothing. So if I have to choose between the government creating jobs through make work programs or what have you and simply providing good governance I would any day choose good governance, because if you actually have good governance and have the institutions in place, then there are other actors in the market that can actually create the jobs. Unfortunately, this country has a legacy of people thinking of government as a source of jobs so it’s not easy to move from that mentality, so that creates a problem, but you know the fact of the matter is that if the government should be anything, it should be providing governance and in a resource constrained environment any distraction from that is not very useful. In terms of skills development all of those things, yes the government does have the role in the sense that it’s one of the providers of education in the market but you know one should be careful not to over play it either.

Shivraj: And what is the role of philanthropy and impact investment in sort of fuelling these engines of SME growth?

Reuben Abraham: I think philanthropy by in large to me it really is the highest form of risk capital there is. So in that sense the true role of philanthropy would be to actually address where the greatest risk is in the market. So for instance if you believe that a lot of opportunities are going a begging because of certain mispricing of risk in the market, one effective way to re-price that risk could be done by philanthropic dollars and that could be done through the mechanism of soft capital, it could through the mechanism of funding research and a variety of those things and one mustn’t forget that the famous venture capital firms of the world, in fact the venture capital industry in the United States actually got going because of the considerable investments by a lot of philanthropic dollars, so I think philanthropic money again should be focussed in on the high risk or highest risk in the market. And the other thing I would probably advise philanthropists to think in terms would be to concentrate on strategic rather than tactical investment and that is a huge problem in India, which is just to bring that down from the abstract level to actual concreteness, why do philanthropists have such a huge preference for opening up 5 schools, rather than asking the question of why aren’t schools coming online and what is it that is preventing it, which is by in large typically a policy question. And so, rather than say I could do something tactical that could send 500 kids to school, you could potentially do something strategic which will obviously not give you the photo op, but could potentially send a hundred thousand kids to school.

Shivraj: And finally, what role would social entrepreneurs or those in their ecosystem really play then to arrive at some sort of solution in the current environment in India?

Shivraj: Alright, Reuben Abraham, thank very much for speaking to the Khemka Forum on Social Entrepreneurship.

Reuben Abraham: Thank you very much.