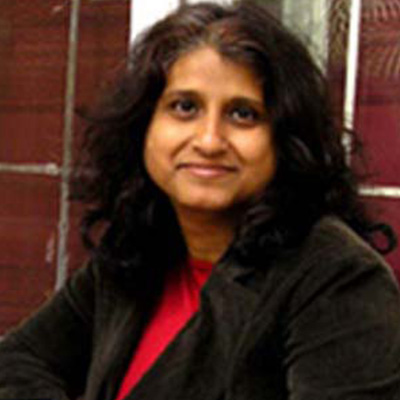 “I am completely convinced of the concept of social enterprise. Profit is very important, because profit is your benchmark in a way that your concept will stand.”

Listen to this podcast interview with India 2011’s Social Entrepreneur of the Year Award winner Neelam Chhiber at her candid best.

Neelam believes that to succeed in social enterprise, you must be able to aggregate small sized producers into larger clusters and give them the benefits of professional experience and tools to compete with mass production.

It is this collaboration that has really set apart Industree Craft Foundation’s supply chain model. Industree Crafts Foundation is an organization that connects rural artisans with urban consumer markets not only across India but also retail outlets globally and has trained over 10,000 artisans to put their own working capital back into the business.

Shivraj: Neelam Chhiber, thank very you so much for speaking to the Khemka Forum on Social Entrepreneurship.

Neelam Chhiber: Thanks Shivraj, pleasure to be here.

Shivraj: Neelam, you graduated as an Industrial design major and you sort of made this journey as a social entrepreneur. What really was the turning point?

Neelam Chhiber: I worked with tribal artisans in Bastar for over a year, and post that I travelled around and looked at a whole host of producers in the craft sector for the next at least six to seven years. And it was very clear then, that we need a market based solution and a very strong personal involvement with producers helped me stay on and have the patience to carry on with what all I have done.

Shivraj: As a social enterprise that connects rural artisans to urban markets, now a lot of sceptics would say government is doing that, NGOs are doing that, what sets you apart?

Neelam Chhiber: I think it was completely the market based approach, the demand based approach. I was in a conversation with a very senior government official and he himself said that it’s really sad but our policies are really not that focussed on demand. Our policies for rural artisans, we want to do stuff for our rural artisans but we are not driven by a demand based model. I mean the very fact that I sat and worked with artisans I realised that all they really needed were orders. They just needed to sell their wares somewhere and have a regular demand. So from the beginning we just needed to open a store and we need to interact with the consumers on a one on one basis and understand this whole supply versus demand thing. And I think this has been our biggest differentiator over the years and which has led to the scaling up of the company and to the award, that it is a demand driven model.

Shivraj: And what’s interesting Neelam is that when one reads and hears from you in past interviews and coverage that you have got, that you’ve really turned a tried and tested model that governments, NGOs have used of self help groups into a profitable model. So tell us a bit about how you achieved that scale and what you really did for these self help groups?

Neelam Chhiber: So initially it was just opening a store and ordering from NGOs and Coops and individual artisans. But over the years, because we set up a non profit in 2000 and started engaging with government programs and government schemes, we realised that governments are in this huge part of forming artisans into self help groups, so immediately we took on that model and we started incubating producer groups and forming them into self help groups because crafts traditionally in this country have been a sort of individual trade or a family trade, it’s never been about good production. We used to have the guilds but the guilds died out a long time back. So what happens we see nowadays is that too many small time producers do not have the facilitation or the kind of incorporation into reasonable sized group production methodology, which is the only thing which will help them compete with mass production. So the benefits of mass production need to be passed on to the artisans sector so that they can compete. Our policy of forming these self help groups which are between 15 and 20 people and then they organise themselves into group production that has taken this to the next level. So now we have a model which we can scale at the production end, rather, because there has to be a clustering model. I mean we have to cluster artisans if we expect any scale to happen, so that has been the difference in our supply chain model.

Shivraj: Neelam you won the Social Entrepreneur of the Year 2011, you were up against other 4 or 5 very formidable finalists. What would it take for a social entrepreneur listening to this interview, what is it that they must keep in mind if they are to stand out and show that what they are doing is not only unique but can also scale?

Neelam Chhiber: The reason that we got was because of the institutionalisation of the idea. So ours is not a one man show, I think in their due diligence they saw a company of 140 people and right from the second level and third level the whole vision is being passed on and they engage deeply with the producer groups, and they engage deeply with the non profit and the fact we’re a hybrid, where the non profit is building on programs you know of soft skill and capacity build the producers and the for profit is trying to work on the demand end. So I think the institutionalisation of it is important. Ideas are good, but the fact that the patience, that we plugged away at it for almost 20 years and have been able to build processes, build systems and build an organisation around it, has been key.

Shivraj: And that brings me to my next question, there has been a whole lot of debate around what social entrepreneurship really means. Lot of people ask the big question, can you both make profit and also do good? In your view is that something which is very workable?

Neelam Chhiber: I am completely convinced of the concept of social enterprise. Profit is very important, because profit is your benchmark in a way, that your concept will stand. But the one aspect of social enterprise or definition today that I don’t agree with, is that its unending profits. For years, I mean we’ve been a for-profit from day one. All our profits always flowed back into the company we have never ever declared a dividend. This is my definition of a profit that you make profits and then you plough them back into scaling up the social enterprise. I think dividends should be declared to the beneficiaries, because I feel in social enterprise, if you ask me at a very gut level the whole definition of a social enterprise is that you bring professionals into the up till now NGO space. So you pay people decent salaries, right? So I believe that even in my enterprise, I believe that all my staff is getting market salaries. We need hearts but we don’t need the bleeding hearts. So everybody is getting a good market wage. So if this company makes profits, then I believe dividends should be going to people who are not getting a good enough market wage.

Shivraj: So your last thoughts on how social entrepreneurs should really approach their unique models?

Neelam Chhiber: I think the very foundation of social enterprise has to be a very very very deep commitment to the cause, okay? And this deep commitment is not something which is in the mind. It has to be something which you have closely experienced for very many years. I still say that we as a company, if we reach anywhere in the next 10 years it will be only because of that one and a half concentrated year that I spent with my artisans in Bastar. My co-founder Geeta Ram who’s got over 25 years of voluntary service in the crafts sector. I mean she’s met millions and millions of artisans in her lifetime. She was my first investor. It really has to come from within us.

Shivraj: Alright and I am sure the passion that you demonstrate will really be an inspiration to many of our listeners, thank you very much Neelam Chhiber for speaking to the Khemka Forum on Social Entrepreneurship.