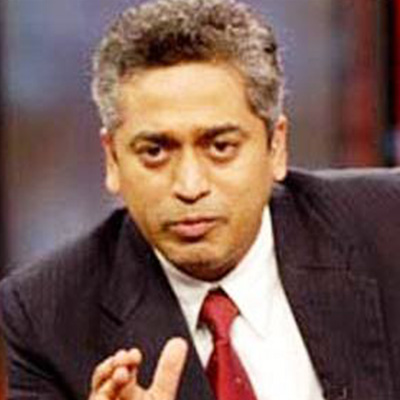 TV in particular is about compelling pictures. So if you can give me a story where the pictures tell the work that you are doing, it makes all the difference.”

In this free wheeling conversation with Shivraj Parshad, Rajdeep Sardesai shares his thoughts on how compelling narratives and effective story-telling can move the needle on pressing social issues, becoming a powerful collaborator for systemic social change.

Shivraj: Rajdeep, thank you so much for speaking to the Khemka Forum on Social Entrepreneurship.

Rajdeep: Thank you very much Shivraj…

Shivraj: Rajdeep, You know globally the media has been seen as a very evolved changemaker, there have been images of war, mobilising social opinion, do you think the Indian media is there yet?

Rajdeep: Well, I think the Indian media in terms of mobilising public opinion. You saw it during the recent Anna Hazare agitation against corruption, the manner in which the media almost became a force multiplier for the agitation to the point where parliament was forced to respond to what was seen as a popular uprising and I think that wouldn’t have happened if the media hadn’t become a force multiplier I think the Anna Hazare’s movement needed the media and I think that is the power of media today in India. Just the sheer size of it and its ability to communicate instantly with so many millions of people makes it a very powerful weapon in the hands of those who would like to see social change for the good and also at times for not so good. It can be a double edged sword but in the Indian context the Indian media is being used by various groups, organisations, agitations as a force multiplier.

Shivraj: So what makes the Indian media tick? What is it that will make you partner with these activist groups or these movements to take it to the next level, because there is always this push and pull between pure hard news and socially responsible reporting, that’s been a push and pull?

Rajdeep: It has been and I think let’s take the case of a 24 hour news channel, it is 24 hours, in 24 hours there is surely some space that can be created for socially viable projects which the media then supports and endorses. We for example at CNN IBN have had the Real Heroes project which we have done with Reliance industries, where the primary motive is to identify every year the 24 anonymous Indians doing great social work who can become inspirational figures for another generation of Indians and I have seen that the Times of India has also taken up what they call the Social Impact awards and I have no doubt that in the years ahead you will have many more such instances where the media can create spaces even while doing the hard news of the day, there is enough space both in newspapers and in TV and even on the net to create campaigns that can be socially inclusive and beneficial to a wider world.

Shivraj: So are these campaigns created with an altruistic motive or is there perhaps an element of branding and marketing?

Rajdeep: I think we live in the age of branding and marketing so let’s not kid ourselves that these are purely altruistic motives but so what, you know I think that as long as your goal is clear, as long as the branding and marketing doesn’t hijack the entire exercise which at one level must be about making India a better place to live in. If the Real Heroes project is able to inspire another 24 Indians to do good work then I believe it is well worth all the branding and marketing that the corporate sponsor needs I think that’s the nature of this media business and I use the word business, we are in the world of business, we’re not in charity, we’re not doing only philanthropy, what we are doing is making the news as relevant to the viewer and then using the power of news, maybe to make India a better place.

Shivraj: Now the relevance of news, we learn in journalism that people tell stories so from a social entrepreneur or someone who is doing something radically from their perspective what would make a more compelling story for the media to sit up and take notice?

Rajdeep: I think if a social entrepreneur is able to tell a story with a face to it is able to show me how his or her social entrepreneurship is actually effecting change on the ground it becomes much more effective. TV in particular is about compelling pictures so if you can give me a story where the pictures tell the work that you are doing it makes all the difference. We’ve just started a series this week which we want to bring right round the year called India Positive. The aim again is very simple, we would like to project Social Entrepreneurship, we would like to project people who are in various social projects and give them a platform to air their views. So as I said we can be a loudspeaker we can be a force multiplier for social entrepreneurs provided those social entrepreneurs are willing to take that extra step of courting the media. I think you need to aggressively court the media; you need to aggressively tell the story to anyone who is listening. Find a way in which that story can be made relevant to the viewer. The viewer must know how do I gain or benefit from that story

Shivraj: And there is a very fine line between actually reporting and becoming a part of the story. How do you keep a sort of check and balance on that?

Rajdeep: Well that’s a problem. I think in the Anna Hazare agitation for example many journalists ended up becoming Anna supporters so where there is as result of that there is the critical eye which should be there was missing. That is a worry, obviously that is a day to day challenge which somewhere we have to tell ourselves we are just tellers of the story we are not the story itself. But you know again like branding and marketing that comes with the territory and we’ve got to live with it as long as it is harnessed for good I think that is a positive sign, I think i would rather reporters became activists for causes which benefited society rather than causes which made us a more difficult place to live in.

Shivraj: And finally the power of social media, how has that changed the dynamics, how powerful has it become as a tool to go beyond just reporting in the media as we know it?

Rajdeep: I think social media is huge. We’ve seen it just now with the Wall street protests, people are using Facebook to organise themselves in America but we’ve done it in India also for the longest time now. A lot of the Anna Hazare movement’s success was its ability to use social media effectively to encourage the young in particular and those who use social media not just to sort of light a candle in their homes but actually to come out onto the streets. And I think Social media is important in creating communities. You’ve got to create a community which is anti corruption or a community which stands for women’s empowerment a community which stands up against female infanticide. Social media can create those communities who can talk to each other, who can find among themselves new ways in which they can take their cause forward. So I think social media is extremely important because instantaneously again with one message on Twitter you can have lakhs of followers who suddenly come to know about something. I think anyone who really wants to take social entrepreneurship to another level should be always willing to use social media as again a force multiplier.

Shivraj: Alright Rajdeep, thank you very much for speaking to the Forum on Social Entrepreneurship

Rajdeep: Thank you very much Shivraj.